Why are Olympic athletes covered in spots?Cupping Therapy in Rio Olympics

You wouldn't need to have an eagle-like eye to notice the black purple circular marks on Phelps' back as he exited the pool. They're not a result of a tattoo mishap or a secret symbol only known to members of the US Olympic swim team. According to The Washington Post, the circles came from cupping, a technique used by trainers who attach suction cups to pull blood to sore and injured areas to speed healing.

Here's how it works.

It's a form of therapy in traditional Chinese medicine.that is used for health purposes such as treating congestion, reducing soreness and increasing blood flow.
The aim is to balance one's "chi" or vital energy. Practitioners believe that sickness or injury happens when too much energy is concentrated in one part of the body.
Cupping helps to redistribute that energy.


Cups are placed on the section of the body in need of repair to create suction. The cupping therapy has been practiced in China for more than thousand years to draw out toxins, mobilize blood flow, alleviate muscle pain,soothe sore muscles and even help cure insominia and improve sleeping quality. 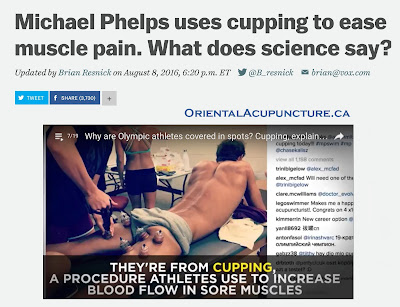 "What Are the Purple Circles on Michael Phelps? Cupping Has an Olympic Moment!"


"I have done it for awhile but I haven’t had bad ones (marks) like this awhile though," Phelps, who in 2015 posted an Instagram photo of himself receiving the therapy, told reporters on Monday. "That’s where I hurt the most," he said of the marks on his shoulder. 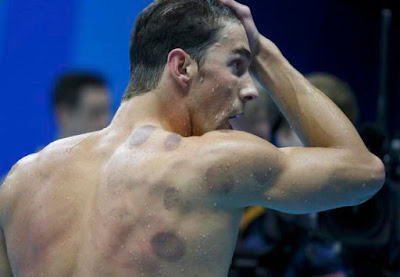 “I’ve done it before meets, pretty much every meet I go to,” Phelps said on Monday. “So I asked for a little cupping yesterday because I was sore."

And it’s not just Phelps sporting the patches either. U.S. gymnast Alex Naddour, 25, and Belarusian swimmer Pavel Sankovich are also fans of the procedure. Naddour posted a selfie with a big cupping mark on his shoulder last week,According to Naddour, the marks are as a result of something, “better than any money I’ve spent on anything else”. while Sankovich, 26, posted a photo on Instagram in June saying, "This kinda Saturday morning. Cupping is a great recovery tool."


Actresses Gwyneth Paltrow, Jennifer Aniston and pop star Justin Bieber, Lady Gaga have also been photographed with the distinctive large circles on their backs and chest. 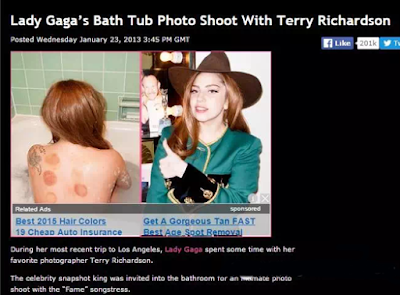 However, while the therapy dates back to ancient Egyptian, Chinese, and Middle Eastern cultures, it has been less popular among more skeptical Western medical societies.

"There is no scientific rationale for expecting any health benefit from cupping," the American Cancer Society said in a statement on Monday.
However, Jessica MacLean, acting director of the International Cupping Therapy Association, said she has seen a 20 percent increase in purchases of cupping therapy equipment and a 50 percent increase of healthcare practitioners seeking out their cupping certificates over the last three days.
MacLean, who receives cupping therapy daily and has been performing the procedure on people for 24 years, said she saw a similar trend after the “The Karate Kid” movie was released in 2010, which featured the therapy briefly.


“Every time we see something like this happen in the media, it piques people’s attention,” said MacLean. "When people get the treatment and they recover really fast, they don’t care about the scientific evidence - they just care that it works."
What's cupping and how does it work?